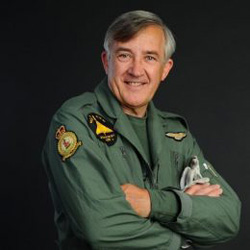 Gerald Howarth’s parents both served in the RAF in World War 2; he was educated at Haileybury Junior School, Bloxham School and Southampton University. At school, he was awarded an RAF Flying Scholarship, obtaining his PPL on Jackaroos at Thruxton in September 1965. At Southampton, he joined the University Air Squadron, logging 120 hours on Chipmunks. He was commissioned in the RAFVR in 1968.

After 12 years in international banking in the City, culminating at Standard Chartered Bank, he was elected to Parliament in 1983, winning the Staffordshire coal mining seat of Cannock & Burntwood from Labour. The only Conservative to serve two terms at Cannock, he lost in 1992 but in 1993 he was selected to fight Aldershot in succession to Sir Julian Critchley and has held the seat since 1997.

In Parliament, he served as an officer of the Conservative Aviation Committee in the 1980s, became Parliamentary Private Secretary (PPS) to Energy Minister Michael Spicer and in 1991 was appointed PPS to Margaret Thatcher whom he served until she left Parliament in 1992.

In 2001 he became Vice Chairman of the Defence Select Committee and was appointed as Shadow Defence Procurement Minister in 2004, serving until 2010 when he became Minister for International Security Strategy at the MoD where he was responsible for defence exports, the EU and Defence Diplomacy, a post he held until 2012 when he left Government and was awarded a Knighthood.

Still flying with the RAE Aero Club at Farnborough, Sir Gerald is also President of the Historic Aircraft Association, a Trustee of the Vulcan to the Sky charity, a Trustee of the British Forces Foundation and joint Patron (with Lady Howarth and Buzz Aldrin) of Aerobility – the British Disabled Flying Association. He became a Freeman of the Honourable Company in 2004 and was elected a Liveryman in 2012. Among the aircraft he has flown he counts the Tiger Moth, the Edgley Optica, the Hawk, the Spitfire and the Pilatus PC-21.