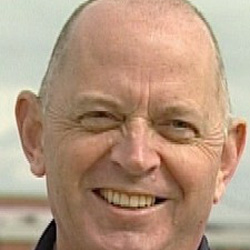 In the 1980s, John flew Phantom F4s with the Royal Air Force in Germany, instructed on the Hawk, graduated from the Empire Test Pilots’ School, and commanded the Experimental Flying squadron at RAE Farnborough.

In 1990 he left the RAF to join BAE Systems as an experimental test pilot where he flew Tornado, Hawk, Eurofighter, MT-003 gyrocopter, Nimrod MRA4, ATP and BAe146/RJ and was a Cessna 421, ATP and BAe146 Captain for the company’s airline. He became Chief Test Pilot Nimrod & Strategic Aircraft in 2003 and Director Flight Operations in 2005, with responsibility for the governance of all flying activities conducted by or on behalf of all the parts of BAE Systems plc and BAE Systems Inc. word-wide as well as overseeing and acting as ‘pilot’ for the first flight of the large twin-engine Mantis UAV.

He displayed the Hawk 1992-95 and the Eurofighter/Typhoon at RIAT in 1995, Farnborough in 1996 and at Berlin and Farnborough in 1998. He also displayed the BAE System’s Blackburn B2, an Avro C19 (Anson) and deHavilland DH60 Cirrus Moth and the Shuttleworth Collection’s vintage aircraft. He has served on Flying Control Committees at East Fortune, Farnborough, Clacton, Samlesbury, Southend on Sea, Southport, Margate and Warton and has been Flying Display Director at Farnborough since 2014.

In 2010 John set up John Turner Aviation Consultants Ltd, providing a source of independent and expert advice on aviation matters. He is a Fellow of the Royal Aeronautical Society, a Liveryman and Director of Aviation Affairs of The Honourable Company of Air Pilots, a member of the A|D|S Flight Operations Committee and a Non-Executive Director of Farnborough International Ltd.