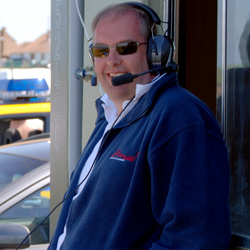 Ian’s love of aviation and air displays began at an early age growing up as he did near Biggin Hill, where he gained his PPL, but it was during his 24 year career in the RAF specialising in Air Traffic Control that his involvement in airshow organisation really began.

His penultimate tour at RAF Brize Norton not only saw him shouldering the responsibility for the Approach Radar facility of the Royal International Air Tattoo (RIAT), which was staged at nearby RAF Fairford, but also led to his appointment as the Flying Display Manager for the event.

On retirement from the RAF Ian joined the permanent staff organising the RIAT where his wide ranging responsibilities encompassed the Emergency Services, Security and Contingency Planning for the event; concurrently he became the Flying Display Director for 2 of the large annual seafront airshows staged in the UK at Sunderland and Eastbourne.

After 4 years he left the permanent staff and became a freelance Display Director and Aviation Consultant. In his new guise, business grew and led to forming a partnership with Ray Thilthorpe (Thilthorpe – Sheeley Associates) and then when joined by Dave Walton, TSA Consulting Ltd was formed. He did continue his association with RIAT for several more years as one of the volunteer group managers. However, after 14 years, he left the RIAT team to focus on his other business activities.

As a co-Director of TSA Consulting Ltd, business continued to grow with events across the UK, Europe and the Middle East. During this time Ian was invited to attend an Airshow Organisers Forum which led to him taking over as its Chair and then chairing a working group to explore the formation of a new industry-wide association, combining the membership of the Organisers’ Forum, the Air Display Association (Europe) and others.

From this work, the British Air Display Association was formed in 2011 and Ian was elected as the Founding Chairman of the new Association. Ian continues as an active Tier 3 MAA/CAA Flying Display Director and mentor and in 2018 was honoured to be appointed an Honorary Vice President of BADA.