Reflecting its close relationship with the Royal Air Force, the Royal International Air Tattoo has confirmed that this summer’s flying display will feature some of the Service’s most iconic aircraft, including the world-famous Red Arrows.

The world’s premier aerobatics display team will once again colour the skies over Fairford with red, white and blue on all three days of the Air Tattoo. The nine BAE Systems Hawk T1/T1A jets, which comprise the renowned Red Arrows, will perform their trademark combination of close formations and precision flying under the leadership of Sqn Ldr David Montenegro.

Also joining the flying display line-up will be the RAF’s leading multi-role combat aircraft, the Typhoon FGR.4. Capable of being deployed in the full spectrum of air operations, from policing and peace support, through to high intensity conflict, the Typhoon shows the enormity of present-day UK air power. Displayed by Flt Lt Ryan Lawton of 29(R) Sqn at RAF Coningsby, the incredible agility and power of the Typhoon is set to thrill spectators.

Taking a step back in time, the RAF’s Battle of Britain Memorial Flight will display two of its most famous and successful WW2 aircraft – the Lancaster and Spitfire – as it celebrates its 60th anniversary. A regular and hugely popular inclusion in recent Air Tattoos, the heavy bomber and fighter aircraft will evoke memories of Britain’s aviation history.

This summer’s Air Tattoo (14-16 July) will pay special tribute to the US Air Force on its 70th anniversary, having a distinct American theme with a special performance from one of the world’s most popular display teams, The Thunderbirds.

The Royal International Air Tattoo is staged annually at RAF Fairford in support of the RAF Charitable Trust. Earlybird admission tickets are available until midnight on May 2, starting at £34. All under-16s go free. To buy tickets, or for more information about aircraft participating at this year’s show, please visit www.airtattoo.com 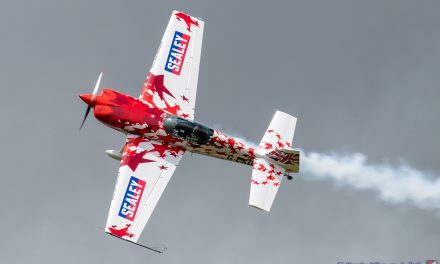