Equipping 815 Naval Air Squadron (NAS) – part of the Lynx Wildcat Maritime Force (LWMF) – the Lynx HMA8 is the sole ‘legacy’ Lynx model now left in Fleet Air Arm service. Introduced in the mid-1990s, it will be retired in March 2017.  A poignant diamond four formation will open Air Day’s flying programme, as we pay tribute to this hard-working and much-deployed type.  Later on, up to four Lynx aircraft will perform a final Role Demonstration. Involving fast-moving helicopters, troops and pyrotechnics, this will be an unmissable spectacle.

Operated by 825 NAS, the Wildcat HMA2 is the Lynx HMA8’s replacement. Based at RNAS Yeovilton, the squadron’s award-winning Royal Navy Black Cats helicopter display team has been taking the state-of-the-art new multi-mission helicopter out onto the airshow circuit since 2014.  Always popular, the Black Cats’ very precise routine will again be an Air Day highlight.

Before the Lynx, anti-submarine/anti-surface warfare was the spritely Westland Wasp’s speciality. Royal Navy Wasps participated in 1982’s Falklands Conflict – a deployment that one privately-operated example’s markings now reflect. The 829 NAS-schemed Wasp HAS1 will give a lively solo display in the hands of owner Terry Martin.

Discounted advance tickets can be purchased at www.royalnavy.mod.uk/yeovilton-airday until 27 June. 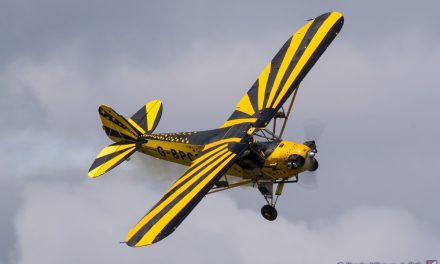