Old Buckenham Airfield is delighted to announce two more stars of its world-famous Airshow on the 1st & 2nd August. Both, fittingly, are Icons of American Aviation and complement an already impressive line-up as the show continues with its theme of “Celebrating America”.

The first aircraft booked is the only flying replica of an extraordinary aircraft; the TravelAir Type R Mystery Ship. Designed in secret in the 1920s, just five Mystery Ships were built. It’s name was given by the press who were so fascinated by the project that TravelAir painted all the factory windows to prevent any details leaking out. Their aim was to create a machine which would be capable of winning air races. This aim was achieved at the very first outing, the 1929 Cleveland Air Races.

Traditionally the races were always won by a military biplane with more horsepower than the others; the Mystery Ship had less power but was a monoplane. Its victory brought about a fundamental change in military policy and caused the US to adopt the monoplane as the preferred method of aircraft design, which has remained the case ever since.

Of the five original Mystery Ships, three survive; all in museums. The aircraft created such an impression that it instantly became an acclaimed design icon. At the Old Buckenham Airshow, the only replica of this icon will be displayed. Built over several years to the exact plans of the original, the replica offers the only chance to see one of the most influential and evocative designs of all time in the best setting possible; airborne and at high speed.

Equally as iconic is the Boeing PT-17 Stearman. This was the trainer for the U.S. during WWII, and would have been the first experience of aviation for the men who flew for the 453rd Bombardment Group at Old Buckenham during the war. After the war, hundreds were sold and used for pleasure flying and crop dusting. Along the way, the Stearman also found fame from a number of iconic movie scenes, perhaps most famously a scene in Alfred Hitchcock’s “North by Northwest” where a Stearman is used to chase Cary Grant across the prairies. The aircraft displaying on both days at the Airshow belongs to ATAviation and is acknowledged to be one of the finest examples in the UK. Painted in a distinctive US NAVY silver, yellow and blue colour scheme with red stripe, the venerable Stearman will offer an impressive array of aerobatic manoeuvres belying its seventy year age.

Another Stearman, this time in bright yellow, will also be much in evidence at the Airshow. The yellow machine, based at Old Buckenham, will be offering Trial Lessons courtesy of the Old Buckenham Aero Club, the airfield’s flying school. During these lessons, available both on the day and in advance, members of the public will be able to go for a flight and take control of the aircraft under the watchful eye of the airfield’s Chief Flying Instructor, aviation legend Wing Commander Gerry Honey O.B.E.

Matt Wilkins, Airshow Organiser “We’re thrilled that the celebration of America we’re organising now boasts two truly great icons to add to an exceptional list. The ability to have a display pilot demonstrate the capabilities of a Stearman, which members of the public could experience over the weekend, is a first. We’re able to offer an unrivalled list of experiences over the weekend from rides in a Monster Truck to an executive helicopter and the WWII legend that is the Stearman. To be able to fly in the same type of aircraft that will be displayed is something very few other events can offer” 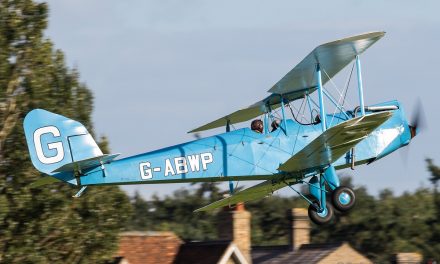 Improving the safety of UK VFR?