At today’s RAF Cosford Air Show Media Launch, the event organisers announced a number of major changes to the show which will be held on Sunday 14th June 2015.

A major change for this year is the move to become an advance ticket only event, which Air Show Director Clive Elliott explained; “In order to speed up entry and shorten queues there will be no tickets available on the gate this year. The change puts us in line with many other large public events and means we know how many visitors are coming and can deal with traffic and parking more effectively.” Tickets for the show are already on sale, both online and from various outlets across the West Midlands.

With the show increasing in popularity each year, the car parking areas have been reviewed for 2015, with the introduction of off-base parking. These new car parking arrangements combined with enhanced traffic routes around the airfield mean that organisers are expecting minimal disruption to visitors.

With access to the show being such a key issue, the organisers have again teamed up with Arriva Trains Wales, London Midland, and for the first time Virgin Trains, to bring an increased rail service on Sunday 14th June. Combined rail & air show tickets are available from all manned UK railway stations, with air show admission discounted to £18.00 for those travelling by rail.

Inside the showground, regulars to the show will notice an increased number of static aircraft on display, as well as subtle changes to the site layout. Peter Reoch, part of the Air Show Operations Team said, “We are working hard to get a really eclectic mix of aircraft into RAF Cosford for the show this year. We’re expanding our award winning ground displays to give visitors the chance to interact with a variety of modern and historic aircraft.”

Organisers of the RAF Cosford Air Show today announced further details of their plans to commemorate the 70th Anniversary of VE-Day at this year’s event.

At the centre of the commemorations on Sunday 14th June will be the “Victory Village”, where visitors can travel back in time to 1945. Attractions planned for the display include live music of the period, a vintage tea room and veterans on hand to tell their stories. Classic vehicles, WWII re-enactment groups and vintage aircraft will also populate the display area, giving all the family something to enjoy.

Air Show Spokesperson Marilyn Summers said, “Our VE70 theme will be an integral part of the show, both with the Victory Village on the ground and with a range of warbirds in the flying display. This year is our first as an advance ticket only event, so we are urging visitors to buy their tickets now to avoid missing out on the spectacular tributes we have planned.”

2015 also marks 75 years since the Battle of Britain, which will be commemorated by the RAF Battle of Britain Memorial Flight bringing a five-ship of fighters to the show alongside their legendary Lancaster bomber. Other historic aircraft due to appear include a P-51D Mustang, P-40 Kittyhawk, C-47 Dakota and the Royal Navy Historic Flight’s Swordfish.

More details on the thrilling flying displays planned for the RAF Cosford Air Show 2015 were announced today, with an array of exciting military aircraft scheduled to appear.

A number of Royal Air Force display assets will be present, with the Eurofighter Typhoon likely to be a highlight for many visitors with its display which showcases the aircraft’s incredible manoeuvrability and raw power. The RAF Falcons parachute display team will also be dropping in, and the Grob Tutor will be on display as part of the UAS90 theme at this year’s show. Sporting a new tail design, the world famous Red Arrows will be on show to dazzle visitors with their mix of graceful formations and jaw-dropping synchro manoeuvres.

Air Show Chairman, Wing Commander Kevin Rayner said, “The air show gives the public a rare chance to come and see what happens on an active military base, and engage directly with the Royal Air Force. As well as the inspiring displays in the air, we have a huge assortment of interactive ground displays for visitors to enjoy inside the hangars and across the showground.”

A big change for the RAF Cosford Air Show this year is the decision to stop selling tickets at the gate. The decision to become an advance ticket only event puts the show inline with other large public events but is also one of many initiatives planned to speed up access to the site. Tickets are already on sale, both online and in a number of outlets, with the show offering free entry to accompanied under-16s 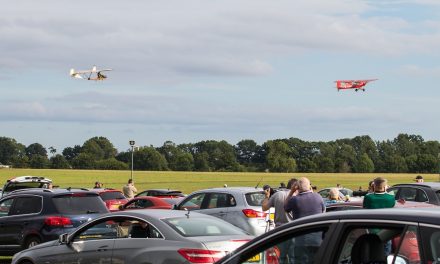