26th March 2015: The 2015 Bournemouth Air Festival, supported by Mouchel, returns for its 8th year this August with a staggering amount of support from the Armed Forces and three exciting new Night Air music evenings.

As the only summer destination for the UK’s best aviation Bournemouth will be hosting 4-days of Red Arrows displays, alongside the mighty Typhoon and Hawk Role Demo – a first for the event.  Supported with a multitude of Royal Navy assets, Pier to Pier county show trading stalls and Wave105 staging three nights of music, including Proms on the Beach, the best chart acts and a celebration of dance music, the festival is more than an airshow!

If last year was big, the presence of Admiral Sir George Michael Zambellas, First Sea Lord & Chief of the Naval Staff of the Royal Navy has confirmed the Navy’s ongoing commitment to the event with land, sea and air assets.  Hugely taken by what he saw the Royal Navy are planning to bring four warships, a large amphibious command ship complete with helicopters, Royal Marines and landing craft, Royal Navy Black Cats helicopter display team and Commando helicopters. With the famous amphibious beach assault demonstrations and beachfront Royal Navy Village, all bolstered tremendously by the world class music from the Royal Marines Band.

The Naval Regional Commander, Commodore Jamie Miller said; “2015 will be the greatest ever concentration of Naval force yet seen off Bournemouth, needless to say I am keeping some surprises back – but rest assured this will be our best year yet!”

With a full allocation of RAF display aircraft, the resort will be is set to welcome back the Red Arrows on ALL 4 days of the Festival with the Battle of Britain Memorial Flight, Tutor and Hawk T2 Role Demo Team and the Typhoon displaying Friday, Saturday and Sunday.

RAF Wing Commander Alf Garnett said; “The Air Festival is a high priority event for the RAF, in terms of audience numbers it’s perfect for showcasing our aircraft and offers a first class arena for engaging with the public and showing them what we do for them on a daily basis.”

The onshore interactive Forces village areas, the Royal Navy with the Army and Royal Marines, and the RAF located in the Waterfront at Pier Approach area, will give Festival goers a chance to find out more about each Force as well as talk to those with first-hand experience, check out displays, speak to the Careers teams, charities and have a chance to try out military equipment.

Councillor Lawrence Williams, Tourism Portfolio Holder said; “For us as a Festival – the organisers, teams of people behind the event and the hundreds of thousands of people who attend – it really shows how far we have come to have such incredible continued Royal Navy and RAF support.  This is our eighth Air Festival and with some great confirmations including the Red Arrows, the Typhoon, Hawk T2 Role Demo Team, superb Naval contingency and amazing Night Air entertainment, we hope this will keep us on top and reinforce us as the UK’s leading aviation event!”

Setting Bournemouth Air Festival apart from the other air events is the stunning Night Air programme.  Supported by the Patrons 100 Club members, and their Ambassador local hotelier David Bailey, they will again be funding three nights of evening air displays as well as supporting this year’s Air Festival charities, The Royal Navy Royal Marines Charity, (ABF) The Soldiers Charity and the RAF Benevolent Fund.

Along with fantastic displays and themed music nights, the official brochure will be taking on a new challenge with the mission of raising £45,000 for the 2015 Air festival charities.  Available from early August the Air Festival brochure will have a £8 cover price and include a double-sided souvenir aircraft poster with wristband and £2 donation to Air Festival charities. To help achieve this organisers are asking local hoteliers to include an Air Festival brochure and its cost in every room or hospitality booking.  Added David Bailey, “It really couldn’t be easier or more effective – it’s something every hotelier can do to help and support the Air Festival and its future!”

With announcements of civilian aircraft participation still to come, which already includes SallyB, The Tigers Parachute Display Team, The Blades and Twister Duo as well as the Wave105 line up 2015 Air Festival is certainly set to be the event of the summer! 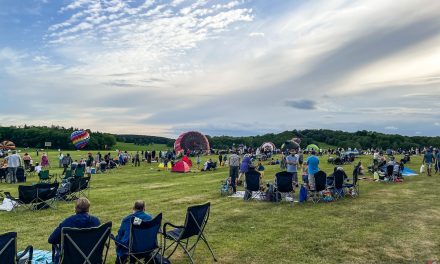